APPLICATION: Diffuse; inhale the aroma; although thick and dark can be diluted and applied to the body if desired!

EMOTIONAL - SPIRITUAL - MENTAL ASPECTS: Dong Quai combats the emotional upheaval and mood swings associate with out-of-balance hormones creating havoc during the years of menstruation and during menopause. The aroma is outstanding for dealing with anxiety and irritability.

PHYSICAL ASPECTS: Dong Quai has been used in Chinese Medicine, in all forms, as a general woman’s tonic. It is known as the “female ginseng.” Dong Quai has the ability to both stimulate and relax the uterine muscle as needed.

The aroma can sometimes help with hormone related headaches. Dong Quai can relieve menstrual cramps, correct infrequent and irregular periods, cope with many of the other symptoms of PMS, and bring relief from menopausal symptoms such as hot flashes.

Dong Quai supports the liver and strengthens the immune system. It is also considered to have positive effects on heart disease by opening the blood vessels. Dong Quai can also be used for bruising and to relieve the pain and inflammation of sprains. This essential oil often has a positive effect on high blood pressure.

CAUTIONS: Traditional herbal medicine usually cautions the use of Dong Quai when taking the blood thinning medicine, coumadin. This caution most likely applies to the essential oil also, which is a more concentrated form. 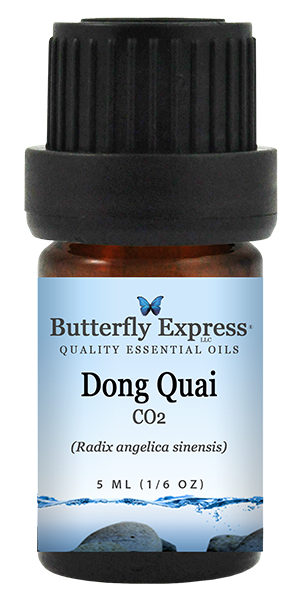