APPLICATION: Rosemary can be diluted and applied anywhere on the body. It can be added to shampoo or conditioner to cover gray in darker hair colors.

GENERAL INFORMATION: Some plants can vary in natural constituents and chemical composition depending on the environment or geographical location in which they are grown. These different varieties of the same plant are called chemotypes. We have two Rosemary chemotypes, Rosemary Cineole and Rosemary Camphor. Both oils have much in common and can be used fairly interchangeably. Though depending on what you are using them for, one may be better than the other. The following is a general description of Rosemary essential oil, followed by some information on the two different varieties.

EMOTIONAL - SPIRITUAL - MENTAL ASPECTS: In emotional work using essential oils, often the influence of the oil is to create a haven of safety from which the person can relearn how to relate to their world. This is not the case with Rosemary. Rosemary fosters an inquisitive spirit. Rosemary sends us out in all directions, looking for light and understanding. Understanding truth is energy in its essential form. Understanding ourselves and what is expected of us by heaven is the most important truth. This understanding is light, and light is knowledge.

Rosemary balances heart function and energizes the solar plexus. Rosemary is specific for people who are usually vibrant, organized, industrious, and sensitive. They have become apathetic due to dwelling on perceived hurts or injustices. People needing Rosemary rarely become imbalanced from stress or too much work; they thrive on work. Rosemary essential oil can send them on a quest to understand what happened and why. With understanding, or even just beginning to ask the right questions comes peace.

PHYSICAL ASPECTS: A glance at the list of physical and energy systems in the affinity for section above gives you some idea of the wide range of action of this amazingly versatile essential oil. Every body system listed above impacts other body systems until Rosemary’s influence resonates throughout the entire system. We will detail just a few of Rosemary’s many therapeutic qualities here.

Rosemary’s action on the brain and nervous system makes it useful for memory loss, learning difficulties, indecisiveness, and mental fatigue. It has a strong antiseptic action against intestinal infections, colitis, flatulence, liver disorders, and respiratory complaints. Being antispasmodic and analgesic, Rosemary is useful for arthritis, muscle pain and weakness, and headaches. In the cardiovascular area, Rosemary assists with arteriosclerosis, palpitations, poor circulation, migraine headaches, and low blood pressure.

Rosemary has an affinity for skin care, hair care, and the dissolving of cellulite. Rosemary is used to minimize gray in the hair of brunettes. The astringent properties of Rosemary make it effective for dandruff, hair loss, and tightening saggy areas of skin.

Rosemary is an excellent oil for exhaustion and general debility, overindulgence in food or drink, and hangovers. Rosemary is mentioned in the literature as helpful for viral hepatitis.

ROSEMARY CAMPHOR: This is the Rosemary Butterfly has had for years. It is higher in Camphor than the other Rosemary varieties which makes it especially beneficial for relieving aches, cramps, muscle and joint pain, and increasing circulation. Because it increases circulation it can also stimulate hair growth. Rosemary Camphor is a powerful stimulant and gives tone to the entire body. It can facilitate digestion and act as a breathing aid with respiratory issues.

ROSEMARY CINEOLE: Rosemary Cineole has less Camphor and more Cineole than Rosemary Camphor. It is gentler than the Camphor variety. Cineole is what gives Eucalyptus many of it’s properties, this makes Rosemary Cineole very good for the respiratory system. It helps break down mucus and open up nasal passages and lungs, and reduces spasmodic coughing and breathing. Rosemary Cineole is also beneficial for killing bacteria and viruses, reducing inflammation, eliminating toxins in the liver and kidneys, and has a marked effect on memory. 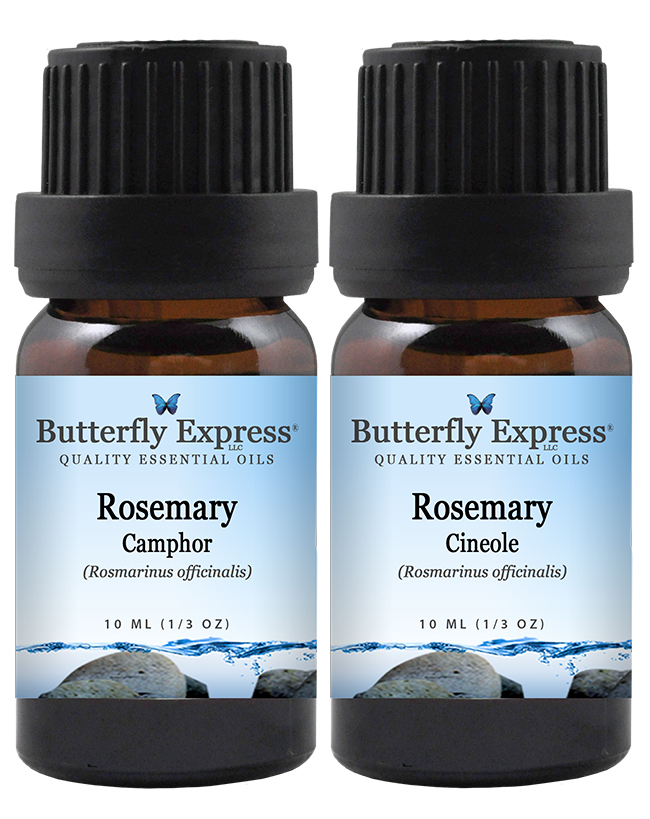